There’s Something About Mary

Jesus was at Bethany, a guest of Simon the Leper. While he was eating dinner, a woman came up carrying a bottle of very expensive perfume. Opening the bottle, she poured it on his head. Some of the guests became furious among themselves. “That’s criminal! A sheer waste! This perfume could have been sold for well over a year’s wages and handed out to the poor.” They swelled up in anger, nearly bursting with indignation over her.

But Jesus said, “Let her alone. Why are you giving her a hard time? She has just done something wonderfully significant for me. You will have the poor with you every day for the rest of your lives. Whenever you feel like it, you can do something for them. Not so with me. She did what she could when she could—she pre-anointed my body for burial. And you can be sure that wherever in the whole world the Message is preached, what she just did is going to be talked about admiringly.”

What is it about Mary?  We only get a few glimpses of Mary of Bethany in the gospels, but on two occasions she’s sitting at the feet of Jesus, just soaking in his presence.

Mary seems to remember better than I do that “sitting at the feet of Jesus” is a source of comfort and renewal.  I try to find it in aimless places, but the bottom line is taking a moment to rest at his feet is where it’s at.

Because Mary took time with Jesus, she could freely give to others as well.  Perceptive Mary took a whole bottle of expensive Nard and broke it over Jesus’ head.  Here’s what’s fascinating about Nard.  It’s from a family of herbs called valerian.  Valerian has been used for centuries as a calming agent and also as a pain reliever.  These are just two of it’s medicinal uses.

Isn’t it interesting that Mary broke this bottle over Jesus’ head only hours before Jesus was nabbed for crucifixion.  Talk about some anxiety pressing in on Jesus.  He may have been fully God, but he was also fully human and He knew what lay ahead of him and he knew He would suffer greatly.

I’m not sure how it was that Mary knew Jesus’ time on earth was coming to a close, or if she even realized the significance of her act?  Maybe she had heard enough of His teachings and was perceptive enough to know the end was not going to be pretty.

What I do know is that Mary did a significant act of compassion and generosity to Jesus in his last hours.  During a time of great anxiety and fear I’m sure.  This was not dismissed lightly by Jesus.

Why do we miss opportunities for compassion?  Why aren’t we perceptive enough to realize someone needs Christ’s  anointing touch through our own hands?

I think we can find that answer it at His feet.

2 thoughts on “There’s Something About Mary”

My Cause: Merajver Lab 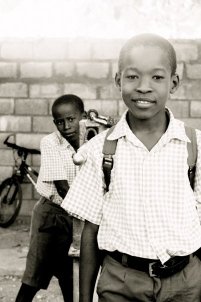 Shouldn't every child have food,shelter and access to education